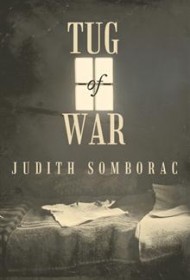 Judith Somborac’s compelling debut novel, Tug of War, is historical fiction that follows 15-year-old Miriana as WWII comes to her small Serbian town. This is not the story of a war-torn big city, nor harrowing front-line battles, but rather the quieter changes that come to this little country family as German Nazis battle for control of the world around them.

The story begins with young Miriana’s life on her family’s farm, where she has been spared many of the atrocities of war. As the story progresses and her aunt and baby cousin flee the city and move into the tiny farmhouse, the hardships of war move closer as well. German soldiers abound, medicine is scarce, the school closes and people must be careful of their actions.

Somborac artfully presents the challenges of life during war. Never overtly dramatic, sensationalizing or exploitive, the plot moves skillfully through realistic scenes, both tense and not. When Miriana needs to give up her bedroom for her aunt, it’s just as fascinating to read as when German soldiers stop by the house while Miriana’s family harbors a partisan soldier in the cellar, an act that would mean death to all if discovered.

Light-hearted touches found in daily life nicely balance hardships with happiness, whether Miriana is laughing with her little cousin while feeding the farm animals or experiencing her first kiss at a Christmas dinner. Compounding all this is the author’s ability to craft characters that come to life off the page.

Somborac’s first novel excels at opening a door to the little-explored history of WWII in the Serbian countryside. She expertly blends period details and information with her lively characters, creating a novel that is a joy from start to finish. Tug of War is recommended for both adults and young adults interested in history, historical fiction, 20th century social life of Eastern European countries, and/or WWII.