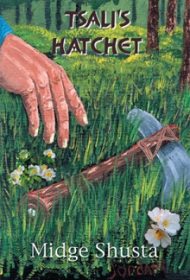 This action-packed novel tells the story of Cherokee Native Americans attempting to resist white America’s takeover of their land.

The book begins in Georgia in 1837 with Tsali, a Cherokee brave, enjoying an idyllic existence with his wife Anawaggia and their children, before Georgia State Pony Soldiers attack and forcibly remove them to an internment camp. Tsali frees his family and leads them to sanctuary, while the U.S. military pursues them. After a tragic encounter, Anawaggia and other Cherokee are forced to travel “the trail of tears” to the newly designated Indian territory. During the harrowing journey, a romance develops between Anawaggia and Noah Sterling, the lieutenant put in charge of their travel.

The novel is somewhat unusual, as it starts off as Tsali’s story, but switches to become Anawaggia’s. In many ways, hers is the more engaging tale, for as a ghighau, or woman of authority in Cherokee society, she commands power and respect. Her relationship with Sterling, a white soldier somewhat responsible for her people’s troubles, is presented with great complexity and drama.

The novel depicts the “trail of tears” in all its brutal reality, with dramatic incidents of starvation, near-drowning, and frostbite that make for compelling reading. The narrative also presents details about Cherokee culture, from marriage ceremonies to burial practices, giving a fascinating glimpse into a world unknown to many.

The book contains a large political element, with various factions of Cherokee people scheming to seize control of the nation. While this provides an intriguing narrative thread, sometimes it is difficult to keep track of the characters in these groups, who weave in and out of the story. In addition, some of the quieter scenes feel too slow, dragging down the plot.

Nonetheless, with an exciting plot featuring plenty of violence, political intrigue, and romance, as well as sympathetic characters and readable prose, the story is sure to command readers’ attention and please historical fiction fans.