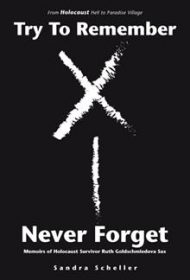 Try To Remember, Never Forget is an unconventional memoir written and narrated by a Holocaust survivor’s daughter. The book traces the journey of Ruth Goldschmiedova Sax, who at 13 was sent with her parents to the German-controlled ghetto of Theresienstadt, then on to Auschwitz. Miraculously, all three survived.

Nearly half of the book takes place in America after the war. The family eventually settled in San Diego, where Ruthie was still living when the book was written.

Author Sandra Scheller is as much a presence in her mother’s story as she is in her mother’s life, interjecting comments, such as: “One thing I can say about my mom, she will starve herself to death if someone has not eaten before her.” And: “Again, I am laughing inside because I am just amazed at the stories Ruthie tells.”

The book’s folksy style recalls oral history. Stories and anecdotes are cobbled together; the timeline meanders. Ruthie is in the concentration camp in one paragraph and back in her pre-Nazi childhood the next. Cliches abound: With “the patience of a saint,” Ruthie wanted to “follow in her father’s footsteps” … They were “one big happy family.” Oddly, none of this detracts from the story. On the contrary, one gets a sense of Ruthie and Scheller sipping tea and discussing the events of her long, well-lived life.

Scheller regrettably veers off-course with her own account of a former boss who, “I believe, was Adolf Hitler in a past life. I …believe that Hitler was so evil he formed himself into another life here on earth, becoming the boss in our department.” She also equates fumes from a sewer trap under her sewing machine at work with the gas chamber of Auschwitz, “except Auschwitz didn’t have a smell that made you sick.”

Despite the unfortunate metaphor, Try To Remember remains a compelling if eccentric read for those interested in the Holocaust and stories of the brave souls who survived it.