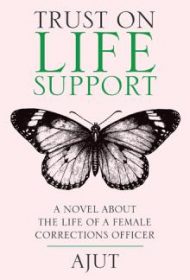 As a child, author Ajut visited her father in a state prison known as “the abyss,” where he was serving time for domestic violence. As a 30-year-old-single mother, she returned to that maximum-security prison as a guard, attracted by the fat paycheck and benefits.

Now retired, she shares the horrors of that time in Trust of Life Support, zeroing in on the misogyny and sexual perversion she experienced there. (While the subtitle calls this a “novel,” it appears to be a memoir instead.) Her hope, she writes, is that these blunt, candid thoughts will help abuse victims understand their situations and seek help. The writing process also seems to have helped Ajut purge some especially horrific memories.

Ajut starts by asserting that corrections officers are as isolated and institutionalized as the inmates, corrupting some, demoralizing others. She survived by using street smarts developed while growing up in inner-city housing projects, and soon realized that all women begin as fresh meat to be devoured by the 2,500 unruly inmates housed within what she calls the “gates of hell.” Women who “wear their hearts in their panties” subject themselves to manipulation and sexual abuse that can lead to their own incarceration or even deaths. She survived by hardening herself against the intimidation of inmates and officers alike.

Vivid descriptions of the rhythm of daily prison life, the differences between male and female prisons, and Ajut’s harrowing childhood make for fascinating reading. But unfortunately, too much of the narrative focuses on illicit sexual liaisons between inmates and female visitors. Graphic descriptions of perverse, brutal behavior soon become deeply disturbing—without offering broader insights that would reward readers for persevering through such tough passages. Eventually, the litany of sexual acts makes readers feel as trapped and sullied as the author herself often felt at work.

Readers looking for illumination – or help understanding their own abuse — will find little of that larger context here. Those content with sheer voyeurism will find the often salacious musings of a woman who lived to tell about her own “incarceration.”