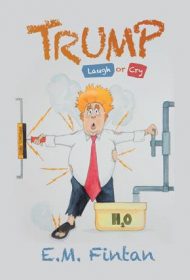 E. M. Fintan has taken his lifelong hobby of cartooning to the next level with his first published collection, Trump: Laugh or Cry. Over 100 pages, Fintan looks at the 2016 campaign and election and the first two years of Donald Trump’s presidency.

A Trumper, he is not. The author skewers the 45th president and the familiar cast, shady and otherwise, who have been part of America’s recent political circus. A doltish-looking Trump is the featured character in nearly every cartoon. But Fintan also finds room for others in the Trump orbit, such as Vladimir Putin, Kim Jong-un, Mohammad bin Salman, Steve Bannon and Sean “Spicey” Spicer. Former Trump GOP rivals— “Low Energy Jeb,” “Ly’n Ted” and “Little Marco”—also pop up, as do Hillary Clinton and Bernie Sanders.

The book opens with a cartoon of Trump on the gold Trump Tower escalator that he rode to the June, 2015, announcement of his candidacy. The caption reads: “The ride down is a metaphor for where I will take this country.”

Several panels mock Trump’s golf game and his penchant for cheating. One cartoon has him giving the reader the finger and saying, “Roosevelt delivered the new deal [sic]. I will deliver the raw deal.” Another has Trump lawyer Rudy Giuliani proclaiming “I used to be America’s mayor. Now I’m America’s nightmare.”

Political cartoons don’t carry the weight they once did, so it’s nice to see someone at least trying to breathe some life into what was once a respected form of journalism. Fintan’s drawings are nicely rendered: expressive, colorful and lively. Unfortunately, his messages are not particularly deep or nuanced. The book is more of a thumb in the eye for Trump than a sophisticated view of the president’s foibles and follies.

Those looking for some nuance in the artist’s analysis of events, won’t find it here. Still, anti-Trumpers will likely enjoy the no-holds-barred approach Fintan takes in these pages.