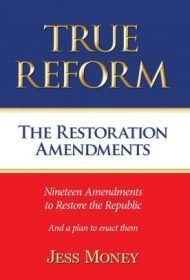 Donald Trump’s election revealed a deep disenchantment with “establishment” politicians. Jess Money’s True Reform goes further, calling for a “Second American Revolution” to retake the country from those who have, in his view, hijacked it.  Money offers 19 Constitutional Amendments to rescue the country from a corrupt elite.

Money begins by reviewing the alarming state of the nation. Environmental catastrophe looms; the war on drugs and attempts to reform education have failed. The New Economy presents existential challenges to the U.S., while political and military institutions have been corrupted by corporate interests.

He then devotes subsequent chapters to specific issues (“Equal Justice”; “Election Integrity,” etc.) and cites relevant amendments, offering lengthy justification for each. His “restoration amendments” ensure good governance while an “economic bill of rights” secures a right to employment, retirement, healthcare and Veteran’s benefits. Many amendments offer familiar ideas, including term limits for Congress and the Supreme Court, public financing of elections, and an end to gerrymandering. Money would also create a Government Accountability Office as an independent branch, overseeing all levels of government.

Members of both parties would approve of many of Money’s ideas. But some of his arguments are flawed in detail and substance. He most often references articles in the popular press, including sharply partisan sources, as well as Wikipedia. This often results in superficial discussions. For example, the author compares Canada’s bilingualism, and the fractious history of French-speaking Quebec, with alleged language challenges raised by the presence of Hispanic immigrants in America. The thinness of Money’s understanding of Quebec’s history compromises the examination.

The book is written in a conversational style, sometimes profane (“No. Fucking. Way.“), which can be off-putting. Money is passionate about reform, and many of his amendments are good ideas, clearly articulated, but his long justifications become tedious, especially since the language of his amendments speaks for itself.

Money makes a solid case for the need for reform, but deeper research and judicious trimming of his narrative would prove more effective overall.