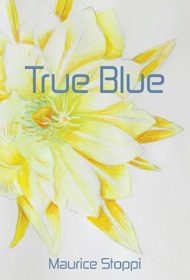 In True Blue, author Maurice Stoppi explores the meaning of love in a relationship where the couple seems to have little in common.

Ruth Barnett and John Egmont fall in love while stationed at Gatow Airfield after WWII. John is a decorated Royal Air Force flight officer assigned to airlift supplies to East Berlin during the Soviet Union blockade; Ruth is a member of the Women’s Auxiliary Air Force and provides support to the officers. John is uppercrust British Church of England; Ruth is working-class Jewish. John is considered a handsome catch; Ruth is described as one of the “less comely WAAFs.”

Nevertheless, the two successfully navigate their differences, and after their wedding, they honeymoon in Jamaica at the behest of John’s war buddy. Jamaica is a study in contrasts, with great wealth and great poverty, but John and Ruth are quickly won over by the weather and friendly people. John’s sister Philippa “Phil” joins them in Jamaica, where she becomes entangled with two Jamaican suitors. When John is offered a high-level job on the island, he and Ruth must decide whether to leave Britain behind.

Despite numerous potential conflicts, the book lacks narrative tension. Nothing eventful really happens, and every problem is easily resolved. Phil’s love conflict is dispensed with quickly, thanks to Ruth’s advice. Ruth and John’s parents embrace the couple’s religious and cultural differences, even attending church and synagogue on holidays.

The author has a rather sweet, old-fashioned writing style suited to the era: “Darling, we have not ventured outside since we arrive here at the hotel. Now that breakfast is over, why don’t we go for a walk around Bloomsbury Square?” Unfortunately, he also tends to pontificate through his characters on everything from the history of Jamaica to the once-a-year blooming of the cereus flower.

Many will wish for more a more compelling plot. Still, the history and the author’s first-hand knowledge of Jamaica may have some appeal for armchair readers.