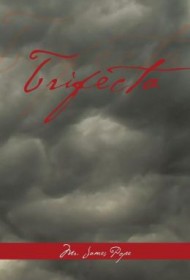 Trifecta is the tale of one man and the three generations of women he has relationships with.

David is married to Julia, a woman everyone besides David seems to know is a lesbian. Julia has a teenage daughter, Ashley, and an attractive mother with a youthful spirit, Hazel.

Julia and David dated in high school, but Julia eventually dropped him and later wound up in a marriage destined to fail. When David, who had subsequently forged a lucrative career with an oil equipment manufacturer, learned of her hard luck, he swooped in to save the small family. Now years later, their marriage is nearing its end.

But if David notices the growing distance between him and his wife, it is of little consequence as he juggles affairs with both Ashley and Hazel – and the occasional fling in his travels. Meanwhile, Julia’s girlfriend encourages Julia to leave David so the pair can have an open life together.

This is an improbable tale in which, regardless of the behavior, all ends well. The main plot is thin, relying largely on sex scenes that often seem gratuitous. Many moments seem dropped in for no particular reason other than to fill space, such as a passage where David is flying home from Helsinki when a flight attendant offers him a choice of fish or reindeer. David responds that he’ll have “chunks of Bambi,” prompting two children to burst into tears.

Editing issues also abound, such as a character found “in distress,” who is also deemed cold and obviously dead in what seems to be the same moment, or this redundancy: “two happy, carefree men with not a care in the world.”

This is generally a pleasant read, but its flaws are significant: The characters tend to be stereotypes, the plot needs further development and the final outcome is simply not realistic.