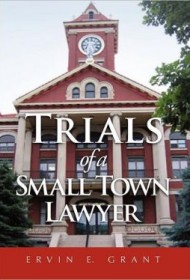 The majority of chapters in Ervin Grant’s slim book, Trials of a Small Town Lawyer, are a scant two pages long–long enough for us to gradually take pleasure in the Kansas author’s plainspoken voice, but not long enough, unfortunately, to get a good sense of his experiences, let alone go along for the ride.

Grant doesn’t name the city where he practiced, the dates of his practice, or most of the characters in the 19 discrete stories. Instead, he talks about the “local alcoholic,” “young businessman,” “well-known insurance counsel,” or “slightly older counsel in the neighboring county.” Such sketches don’t allow room for characterization, imagery, narrative tension or the other techniques that make stories come alive.

Not that Grant’s life has been without excitement and satisfaction. For example, “early in the practice” he successfully argued before the Kansas Supreme Court that his client, who survived an auto collision, had a right to recover for the wrongful death of her “unborn child,” as long as the fetus was viable at the time of the collision. (Without a year or case name, though, there is no way for the average reader to get more information than what he relays in just 500 words.) In another story, Grant describes a seminar on international law at the Hague, but this sentence is typically vague: “We met with Russian lawyers and judges during the Cold War and discovered that we had so much in common.”

Grant’s memory of the telephone operator on a party line informing him that the Eureka, Kansas, attorney he sought “is at the race track,” and his surprise when his expert witness proceeds with a sex change between their first meeting and trial, suggests the attorney does have stories to tell from 60 years of practice. But these sketches leave the reader hungry for more details from this well-meaning, straight-talking Kansan.