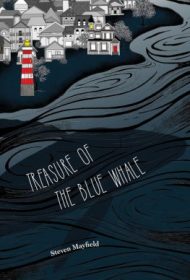 In these challenging times, Steven Mayfield’s Treasure of the Blue Whale provides an oasis of humor and comfort as it portrays a small town during the Great Depression.

Mayfield’s novel takes place in 1934, in a California seaside town called Tesoro. Narrator Connor O’Halloran, 91, reflects on what happened in his town when he was 10-years-old.

Connor has a younger brother named Alex, an absent father, and a mother best described as having “lived about three streets past even-tempered and one short of loony.” As such, the kind townsfolk have been watching out for the family.

Everything changes, however, when Connor discovers a ginormous piece of ambergris on the beach, spit up by some whale. (Perfumers covet ambergris, as it makes their aromas last longer.) Instead of keeping the treasure for himself and his family, Connor decides to share the proceeds with the town (about $146,000 per family), excluding the wealthiest man, Cyrus Dinkle, “as a lesson from me to him for being miserly, cantankerous, and allegedly felonious.”

But the scheming Dinkle persuades folks to take loans against their shares, which sets off a series of crazy buying—new cars, a mail-order bride, a small monkey named Mr. Sprinkles, among other things—as well as the even zanier results of such buying.

As things unravel, the mayhem is delightfully rendered. For example, after Coach Wally Buford’s wife Judy decides to order a jeweled commode, she describes it as “a special order, custom-made item. Definitely not pedestrian.” …Of course, hardly anyone in Tesoro understood Judy’s use of the word in that context, but the more perplexing question attached to her purchase was the lack of a sewer system in our town.”

Mayfield beautifully depicts the town’s characters and what happens to them, creating a novel that’s charming and even laugh-out-loud funny.  Although the story’s pace might be a bit slow for some readers, anyone who enjoys a well-written yarn, a tall tale or two and historical fiction will likely savor this book.