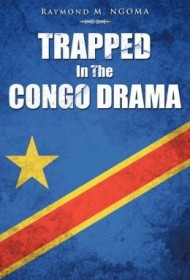 Trapped in the Congo Drama is a novel set in the troubled African republic of the title. It weaves together a story of characters whose potential is cut short by brutality and war. The story itself has great potential, but there are a few problems to work out first.

When Gilbert Mavinga, “a very beautiful and awesome young man,” graduates from high school, his college studies take him all the way to Prague. He falls in love with Dorothy, who has also come to Prague to study. She is already pregnant by another man from the Congo, but Gilbert agrees to parent the child. Both study and work hard, but the political rebellion at home destroys their lives and happiness. Rape, murder, malaria and AIDS cast a long shadow over these once idealistic students, and the story ends in the Congo on a sad and desolate note.

Drama centers on events most American readers will not know much about, so it’s a shame it’s not written with clearer language and more consistent plotting. After a lengthy introduction set in the 1980s and following Gilbert from high school to college and beyond, we’re lulled into a sense that this is a story about relationships. There’s no foreshadowing, so the violence at the end of the book comes abruptly and is shocking in its relentlessness: “Many ladies had their intimate organs mutilated by those who raped them. And the consequences were enormous; kids were left orphans on streets, living by themselves. What could a five-year-old girl, with infirmity in the leg, do alone on the street?”

Author Ngoma uses the back cover of the book for a nine-paragraph essay on the atrocities committed in the Congo; clearly it’s a cause that’s near and dear to his heart. With comprehensive editing and some help with translation, this book could become equally important to his readers.