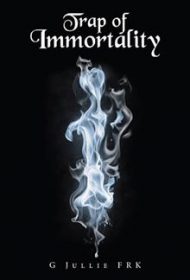 Trap of Immortality is an adventure fantasy featuring a heroic young princess named Eliza who embarks on a quest that will irrevocably change her life.

Eliza and her family are traveling by sea to Aversleek to observe the Ceremony of Peace, a once-in-a-lifetime gathering where the population of the realm of Adda celebrate the achievements of their ancestors. Eliza is not exactly looking forward to the trip. Her father is abusive and overbearing and her mother emotionally detached.

But when a long-dead prince named Alba Pensan begins communicating with Eliza and her brother Seth, they embark on a quest to find the pieces of the Chalice of Immortality, which will somehow remake the world. After being renounced (and almost killed) by her father for refusing to marry a royal suitor, Eliza sets out with a small group of friends to find the pieces of the chalice. Adventure ensues.

While the novel’s premise could have been developed into a readable story, the narrative is laid low by numerous flaws. The skeletal nature of the writing—with little to no overall description throughout—negatively affects readers’ ability to immerse themselves in the author’s world. Additionally, the story suffers from a lackadaisical plot devoid of focus, tension and pacing.

But it is the innumerable writing errors that make this a frustrating and at times indecipherable read. Consider this: “I scream as my sword slices across the evils snakes throat, she screams, piercingly, and gobbles to the ground…” And this: “I lull my head to the side, feeling bored and heavy with more liquid in me then I can hold, and look out of a nearby window, my sleepy eyes air at the silver moon in the sky, I sigh and suddenly shoot up.”

With such major grammatical stumbling blocks, as well as cardboard characters, superficial world building, and a conclusion that is more an unsatisfying respite than ending, this book requires rethinking in order to attract an audience.