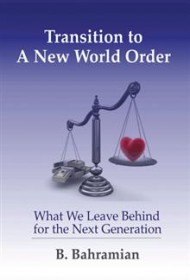 This intriguing book explores the softer side of a harsh conspiracy theory. The “New World Order” (or NWO) refers to the state of affairs that would exist if a powerful elite overthrows all the world’s governments and institutes one government for the entire planet. Popular among end-of-the-worlders and the paramilitary right wing, the NWO predicts a bloody, inevitable, worldwide coup d’Ã©tat.

B. Bahramian, director of the Construction Technology program at the University of Maryland-Shady Grove, clearly is in favor of the one-world government that the NWO looks forward to–in his words, “truly unifying the world as one entity.” However, as Bahramian says, his is not a conspiratorial vision. Unlike proponents of the NWO who appear with regularity in the American media, he is considerably less convinced of the path that the NWO needs to follow.

In a book slightly marred by errors of editing and a rambling writing style, Bahramian offers no solutions; he only bemoans the present. For him, thanks to unchecked consumerism, the United States has irretrievably lost its way; there is even less hope for the United Nations; India has begun to find its way; and the People’s Republic of China is the closest to achieving a perfect government. All this, of course, is highly debatable, and the author, using a fresh and welcome approach when discussing the NWO, avoids diatribe, leaving plenty of room for the reader to argue with him.

As a result, this book does not fit the conspiracy genre, which tends to preach the infallibility of its solutions. Like his predecessors in utopian writing, Bahramian offers a book of questions without concrete answers. And there is always a place for a book that asks questions.