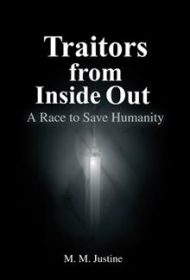 The first in a trilogy, Traitors from Inside Out is a densely plotted contemporary medical thriller set in Sweden. The story pits a global medical empire dedicated to natural, accessible healing and well being against an evil global pharmaceutical’s war on human health.

At the novel’s center is Martina, a doctor who took over her family’s vast medical company following the tragic deaths of her parents. Martina is on the brink of releasing a compound that will eliminate medical treatment as the world now knows it, ending big pharma’s dominance for all time. Meanwhile, a state-sanctioned vaccine, dubbed “life vaccine,” is causing autism and other childhood disorders.

Sub-plots involve Martina’s ex-husband and new lover, and mad scientists who create a different vaccine to induce menopause in teenagers covertly, rendering them sterile. Their goal is the extinction of humankind.

While this is a broad outline of the plot, the details are sketchy and often confusing. The author doesn’t tell us the origins and history of the “life vaccine” and why the state is sanctioning its use. Also: is it being used globally? What are its political implications? It’s left to readers to extrapolate what might be going on and what the hideous potential for this treatment is. The affiliations of the scientists creating the sterilization vaccine are also murky, as is the identity of the group of investors who will tolerate anything, even murder, in their profit-driven quest to keep Martina’s panacea off the market.

While these are significant flaws, the book has many strengths: The author has drawn the characters so well that readers can’t help but be invested in the outcome; the novel’s Swedish atmospherics are so beautifully handled that readers may think they feel the sting of sleet on their cheeks; and the skillfully rendered dialogue flows naturally.

Those who can overlook the unfortunate plot holes will find many qualities to appreciate —and a conclusion that’s a cliffhanger of the first order.