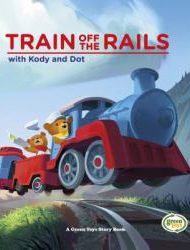 Kody and Dot, teddy bears who drive a delivery train, get a sense of the bigger picture around them in Train Off the Rails, an excellent picture book for young children from toy manufacturer Green Toys.

Kody and Dot travel the same loop every day delivering boxes, and have grown somewhat bored with the routine. One day, their train hits a bump and bounces off the tracks, and they head off into the wilderness. They explore for a while, and see the boxes they previously delivered being moved by boats, trucks, cars, and planes. With a new appreciation for the importance of their delivery train, they return to their usual loop and arrive home with a newly expanded map and worldview.

Train off the Rails is a storybook designed to accompany a toy train set, but the book is anything but an afterthought, standing on its own as a wry statement about exceeding limitations. The book encourages children to use their imaginations, but also strikes a pleasant note as the bears learn of the importance of their daily delivery run in the context of the wider community. It’s a lesson that has parallels in many other aspects of a young child’s world, as he or she begins to make connections of cause and effect between one task or job and another.

Robert von Goeben’s text is a perfect balance of simplicity and rhyme, as when the bears watch their neighbors using the items they’ve delivered: ” ‘This is amazing,’ Kody exclaimed./ ‘I thought that our job was so small.’/ Dot agreed, ‘I know what you mean./ It is a big job after all.’”

Yamada’s illustrations carry the same simplicity, with vivid images that capture what toys come to life might be like. Cast in bright, expertly rendered colors, the images are the final component in a book that delivers a perfect package.