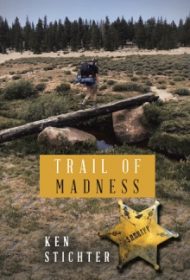 In Ken Stichter’s Trail of Madness, a cold case detective revisits unsolved disappearances that appear to be connected.

In 1972, Orange County is shaken when high school student Cindy Ashae and her date, Carlos, mysteriously vanish from the John Muir Trail hours after prom. When Cindy’s remains are discovered in 1999 entombed in a concrete planter inside the school beneath a time capsule, investigators stumble upon a disturbing pattern of disappearances of backpackers over decades close to where Cindy and Carlos were last seen.

Investigator Van Vanarsdale is tasked with reviving the sheriff’s cold cases. Among the revelations: Carlos had a brief relationship with a mysteriously quiet girl named Allison before Cindy, and it happens that Allison’s father also perished along the trail.

With readers privy to the killer’s identity early on, Stichter spends much of the novel’s first part detailing each disappearance, as well as conveying information on the trail itself. Heavy on names of trailheads, lakes, mile markers and elevations, the story often feels like a travelogue rather than a mystery. The reintroduction of the murder investigation is jarring and sudden, leaving readers little time to adjust.

Much is made of Van’s eccentricities and out-of-the-box thinking, but most of the leads he follows are based on hunches, and his coworkers never question the debatable validity or reasoning behind them. For example, when an earring is found among Cindy’s remains, Van leaps to the conclusion that it’s the mark of the killer, as no one recalls her wearing the earring, nor does it appear in her pictures. Meanwhile, Allison, Cindy and Carlos’s old teachers and friends somehow recall mundane specifics of Allison and Carlos’s interactions, despite having witnessed them over 30 years ago.

While successful as a love letter to the John Muir Trail, the story itself is meandering and repetitive (Carlos is described as being “intrigued” by Allison five times over two pages). Ultimately, Stichter’s mystery gets buried beneath asides and superfluous details.