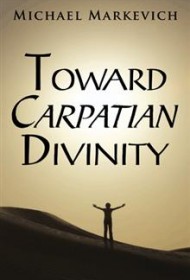 This follow-up to 2006’s Carpadia — which chronicled a group of spiritual explorers on their various journeys of enlightenment — continues their collective quest to bring forth the Fifth civilization by witnessing the birth of a savior who will be the catalyst for humankind’s inner evolution.

In light of the looming five-year birthday of Carpadia — the girl that is destined to “become the greatest prophet of her time” — the cast of characters (ie: disciples) who witnessed her birth are all converging once again at an environmental and spiritual retreat called Holoflux to celebrate not only her birthday but also their spiritual readiness to transcend space and become one with the “Unisphere.” The various metaphysical experiences leading up to the collective revelations at book’s end explore (or at least reference) a fascinating variety of philosophies and mythologies — African folklore, Sufi mysticism, Wicca spirituality, etc. — and take place in some unusual and exotic locales, such as a pilgrimage to the Arctic Ice Shelf and the Skeleton Coast of Africa.

The thematic power of these allegorical stories, however, is buried underneath largely incomprehensible New Age doublespeak. For example:  “A stalk that supplied connections with pure discontinuity must offer both inhalations and exhalations of existential determinations and causality. He received the joy of a perpetually engendered fluidity under the veil of perception and befriended epithanic activity.”  Wading through such language proves tedious at best and utterly confounding at worst. Countless grammatical errors, two-dimensional characters and a weak and at times incoherent storyline add to the novel’s many challenges.

A book of this nature — blending speculative fiction with philosophies involving spiritual consciousness — can be a powerful, life-changing read. (Thea Alexander’s 1971 visionary classic novel 2150 AD is a perfect example.) But the narrative must be engaging and the belief systems must be comprehensible. Unfortunately, this book doesn’t deliver on either of those imperatives.