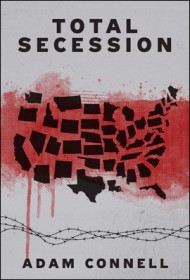 An ex-con and his buddy, both freshly released from a Florida penitentiary in a near-future U.S., take a road trip across a fractured America in Total Secession, a speculative fiction novel by Adam Connell.

Grant’s quest to rejoin his family after a lengthy prison stay is complicated by America’s states turning into sovereign nations. Without federal government standardizing laws from state to state, people can break a law just by driving over a state line, with perilous consequences. There’s also the issue of Grant’s in-laws – who are none too thrilled that he’s a free man – and the family of a man Grant killed in a robbery.

The book’s conceit suggests an examination of political issues, and while that element pops up regularly, the story is actually a backdrop for a character study of Grant. We’re provided insight into Grant’s complicated moral code through his interactions and regular flashbacks to his (invariably grisly) prison experiences.

There’s a lot to like in Total Secession. Connell is a talented writer with a gift for metaphor and characterization, and he populates the oft-pulpy narrative with a variety of colorful characters and action-packed sequences. The dialogue, on the other hand, is both Total Secession’s strongest point and its Achilles’ heel. When it hits, it hits big: several conversations explode off the page with crackling energy that’s reminiscent of Elmore Leonard or Quentin Tarantino. Connell’s skills at colorful phrasing and tension building are fully evident in these passages.

Unfortunately, there’s simply too much talking and not enough story to justify the length. Extensive scenes of supporting characters engaged in protracted conversation could have been trimmed or omitted without harming characterizations already well established by the author.

That said, Total Secession is a largely entertaining tale, and while tightening the story would have made it a stronger novel, those who enjoy crime fiction and adventures with political and futuristic elements will find it an engaging read.