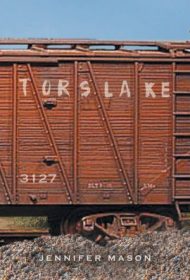 Jennifer Mason’s Tor’s Lake is a neo-noir mystery novel with a postmodern aesthetic.

Elizabeth is a witty narrator, and Mason crafts some memorable passages. About her idealistic assistant, she observes: “Lili was a watery-eyed belonger to many do-gooder organizations, an international pain alleviator.” Unfortunately, Mason’s language can also be overwrought, obscuring more than it illuminates: “I was twenty-two — back when we’d put a few years on our teens, suspended belief and disbelief in grown-up answers, and come through making a living, qualified to overstate the case for poetry.”

The plot of Tor’s Lake is disjointed. Through–lines exist, such as the MacGuffin of what Tor’s Lake refers to, with which Elizabeth is inexplicably obsessed. First, Dilworth tells Elizabeth he’s staying at Tor’s Lake hotel, but she later learns there’s no such place. Then, the name “Tor’s Lake” is discovered inscribed on the side of a train car in a photograph; later it’s rumored (inaccurately) to be referenced in an obscure academic thesis. (Incidentally, at one point Elizabeth’s narration flows into more than 30 pages of an essay on F. Scott Fitzgerald that may or may not be intended to represent that thesis, but which distracts from, rather than advancing, the story.)

Tor’s Lake is a challenging read in both its strengths and weaknesses. Mason’s dense paragraphs of carefully sculpted sentences can be rewarding to unpack, but underneath the language, the central mystery fails to captivate, and the stream–of–consciousness narration often creates more confusion than clarity.