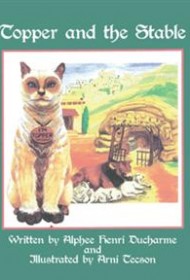 Topper and the Stable is a four-part poem that celebrates the Christmas story by shining the spotlight on three unknown heroes:- Topper the cat, who lives in the stable; Jack the donkey, who carries Mary on her long journey to Bethlehem; and Josh, the owner of the stable and inn where Mary gives birth. All the traditional characters and elements of the Christmas story are also here, including Joseph and Mary, Herod, the Three Wise Men (who have their own part in the four-part poem) and the Shepherds.

Topper the Cat ensures the stable is a safe place for the Christ child when he kills a pack of evil rats sent by Satan. Later, when Topper arrives in Heaven, he is made an angel in reward for his service. Next we meet Jack. He is the gentle donkey who carries Mary to Bethlehem, and then, with the Christ child in her arms, safely home again. Finally, the reader meets Josh, the keeper of the inn. Each of these new characters tells the Christmas story from their own perspective and in so doing, adds richness and detail to the traditional tale.

While the poem is thoughtfully illustrated by Arni Tecson, the book doesn’t adhere to traditional picture book design. Every second page of the book is left blank except for one (which feels like a mistake). Also, because the story is told from different perspectives, the narrative at times seems repetitive. Rhymes aren’t always perfectly honed: for example “manger” is rhymed with “manger,” as if the author simply ran out of creative steam.

Those who can overlook these troubling distractions, however, will find an interesting new take on a timeless story.