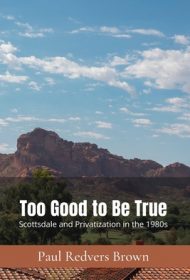 In 1984, the city of Scottsdale, Arizona, sought a company to “design, build, own and operate a water treatment plant for a fee.” The plant would be built on city land and purify water from the Colorado River via the Granite Reef Aqueduct. Too Good to Be True recounts how Paul Redvers Brown involved the consulting environmental engineering company he then worked for, Camp Dresser & McKee (CDM), in this project, recruiting disparate companies, establishing partnerships and corporations to create an entity to meet the city’s needs.

Brown’s clear descriptions of the privatization process, from bidding to completion, should make satisfying reading for MBAs and corporate planners. For instance, he demonstrates the necessity of each company involved and explains the role of bonds, bond insurance and more. He also shows how cutbacks in federal grants and the possibility of utilizing Reagan-era tax incentives led CDM’s planners to search for projects with privately funded water infrastructures.

It’s Brown’s depiction of high-stakes business culture, however, that opens the book to a wider audience. Meetings take place in posh restaurants or established watering holes, which Brown describes with relish: “Paul Shank’s French Quarter restaurant and lounge attracted headliners from across the country…. [making] the French Quarter one of the classiest spots in the Valley—the kind of class served up by cocktail waitresses in strapless corsets and black pantyhose.” The businessmen’s “accoutrements of success” include “corporate titles, impressive offices, public recognition, and respectable salaries….”

Brown also displays self-awareness that renders the book a more thoughtful read: “I gradually developed my own attitude of entitlement…and a budding delusion of invincibility which would contribute to my eventual undoing.”

The book wanders into some gratuitous descriptions (of Detroit’s Wayne County Airport, for instance), and the author fails to show the impact of his lifestyle on his family. Otherwise, Too Good to Be True offers a remarkably balanced and compelling insider’s view of the corporate engineering world throughout an important city project.