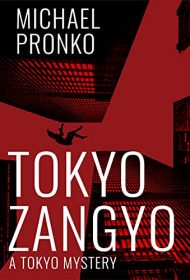 American ex-pat Michael Pronko’s fourth book in his stellar Detective Hiroshi series opens with a high-level executive waking up naked on the roof of his company headquarters across from Tokyo Station, then falling to his death.

The executive’s company is Japan’s largest advertising agency, Senden Infinity, which is about to expand into international markets. The victim, Shigeru Onizuka, was set to transfer to the New York office.

Detective Hiroshi Shimizu is a forensic-accountant-turned-homicide-detective who looks for financial causes for crimes. Hiroshi’s team, including a crusty veteran detective, former sumo wrestlers and an indispensable young woman assistant, is back to solve this case.

Readers learn early on that the dead man supervised Mayu Yamase, who killed herself by jumping from the same spot three years before, after working 100 hours of overtime in one month (the Japanese word for overtime is zangyo, hence the book’s title). The media covered her suicide as a case of karoshi, death by overwork, which happens in Japan.

Shimizu and his team eventually link the case to Mayu’s suicide. The bad guy isn’t hard to figure out, but the novel’s real villain is Japan’s corporate culture of overwork and saving face.

Pronko has lived in Japan for over 20 years and runs a website about Japan’s jazz scene. He slips his appreciation for the music into his immersive narrative. He also includes references to Japanese traditional culture and writes evocative passages about restaurants where the cops like to eat, including this one about entering a noodle shop: “Inside, the rich flavor of boiling ramen and meaty broth enfolded them. It was calming and mouth-watering, like entering a kitchen and a steamy bath at the same time.”

The story and its message for corporate culture is compelling and undeniable, and Pronko’s appreciation for Japan is palpable. His writing is crisp and always engaging. After this latest engrossing story, readers will be eagerly awaiting the series’ fifth installment.