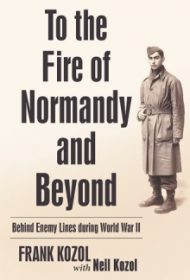 This memoir provides an intimate look at the daily activities, thoughts, and feelings of a Jewish enlisted man in the U.S. Army during WWII.

Author Frank Kozol notes that although he has changed names in the story (he calls himself “Paul Kramer”), “everything he writes about is true.”

As a medic, Kozol saw the bloody results of action in France, Belgium and Germany. Wounded by artillery in the “Bocage”—the hedgerows at Normandy—he declined his purple heart, for fear his mother’s heart might fail when notified he’d been injured.

While typical of the “greatest generation” in terms of his modesty and self-effacing attitude, he also stood out for his many talents. Fluent in French, Kozol was induced to gather information behind enemy lines with the French Resistance. His mission took him to Paris, where he met Edith Piaf, who was with the Resistance. An excellent pianist, he played for Dinah Shore on a USO tour; a British lord and lady; and the wife of a Swiss Watch manufacturer, who gifted him a watch to give his younger brother for his bar mitzvah. Because he spoke Yiddish, a language similar to German, he was assigned to a task force flushing out SS infiltrators in American uniforms.

Kozol details how his religion affected his service. For example, he tells of sharing a shell hole with a soldier from a small Pennsylvania town who kept staring at his head, believing “all Jews had horns.” And he writes of “vainly trying to blink away the tears” as he helped liberate Buchenwald.

Kozol’s straightforward writing can be redundant at times. The narrative is also packed with unnecessary details (e.g.: the specifics of Kozol’s technical training when working with the company dentist). At 519 pages, the book could use a closer edit.

Nonetheless, this is a compelling and authentic portrayal of the life of a young American G.I. during war. Readers will find it well worth their time.