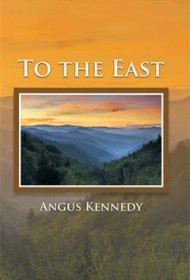 In this final novel in Angus Kennedy’s “Out of Solitude trilogy,” Australian wine writer Andrew Johnston returns to Dubrovnik to tie up some loose ends with a romantic interest, and unknowingly finds himself back in the throes of a sinister plot.

The story begins when Johnston, fresh from helping his brother care for his sick wife, makes plans to see his old friend Niki in Dubrovnik, hoping to determine if the attraction remains. But first Johnston must complete an assignment for a magazine on California wineries. After days on the road, he flies to Croatia, where a mystery set in motion on a previous trip surrounding missing papers and an exhaustive genealogy quest has already begun unraveling.

To The East is professionally written and something of a showcase for Kennedy’s vast knowledge about California wineries. This can work both to the benefit and detriment of the book. While those who share his interest may be intrigued with such information, readers interested in a work of fiction will find that the extensive history of California wine included here contributes almost nothing to the plot and can slow the pace. It is only after Kennedy is midway into the book that he focuses on the central plot line, which occurs largely in Dubrovnik. Once there, however, his knowledge of the history of Croatia, Bosnia and Herzegovina adds an air of mastery and intrigue.

Unfortunately, Kennedy doesn’t always fill in the background from the preceding two novels, and while readers will likely be able to connect the dots, a few paragraphs of backstory here and there would make for a fuller reading experience.

Despite such issues, Kennedy’s writing, knowledge and set up of the mystery make this a largely enjoyable read with an added benefit: It will no doubt leave readers much more knowledgeable about a number of topics when they are finished.