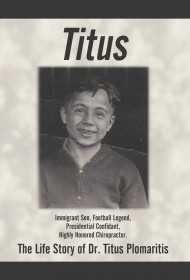 Titus Plomaritis’ life story is not unlike that of millions of Americans. The son of immigrants and a child of the Depression, he has had a long and satisfying life — a 60-plus-year marriage that produced four successful children, a career as a prominent chiropractor, and an athletic career of some note.

A lot happens to a man in 83 years, events that are told and retold at family gatherings. Rather than just listening to Plomaritis’ reminiscences, his children encouraged him to get a computer and put his memories in writing. Seven years later, we have Titus.

The book isn’t as much a linear narrative of Plomaritis’ life as it is a long and sometimes jumbled collection of anecdotes, news clippings, cartoons, recipes and other assorted items related to his life. He shares stories of his childhood: about his strict father, of shining shoes, roller skating and shoveling snow. Over nearly 600 pages, we follow him through school, military service, and his career. Some of his stories are interesting (he was a Boston University teammate and close friend of Harry Agganis, the New England sports legend who died of a pulmonary embolism at 26). Other stories, such as the recounting of his golfing accomplishments, are more mundane.

Taken as a whole, Titus is a nice picture of a full, interesting life. Plomaritis’ computer skills, he tells readers, were nil when he started the book, but he took classes and became proficient. And that may be an underlying lesson here: Plomaritis has never been one to shirk from a challenge, whether as a 5-foot-5-inch running back and kicker or a young man working hard to support his family and achieve success in business.

Given its unwieldy length and lack of a tight narrative arc, his book is most likely to interest his family and friends, though all readers could benefit from the example of such a fine role model.