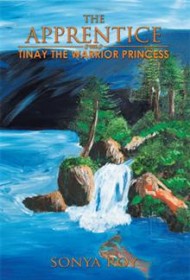 An intriguing blend of science fiction and fantasy, Sonya Roy’s sequel to Tinay the Warrior Princess: The Initiation continues the adventures of Tinay, a “desert princess” from the planet Sasgorg whose destiny could very well make her the one who finally overthrows a tyrannical queen and restores freedom to the repressed innocents inhabiting the various planets colonized by Atlantean settlers millennia earlier.

Although the backstory is not adequately explained in this second novel, readers should have no problem following Tinay’s immediate concerns, which include beginning her apprenticeship as an artist on the planet Os. Separated from her family and alone in a foreign world, she must deal with a plethora of issues herself, the most important of which is witnessing a musician who sang a controversial song get arrested and tortured by the queen’s henchmen. Her decisions will not only put her own life in danger but also affect the futures of countless others.

While the storyline is structurally solid, the narrative loses focus in spots, bogging down the pacing and momentum. Also, although the storyline—essentially a young woman’s journey of self-discovery—is ripe for thematic profundity and existential and spiritual enlightenment (particularly considering that Roy describes herself as a “master holistic healer and shamanic practitioner”), the novel misses numerous opportunities to make Tinay’s experiences more impactful. The sequences in which Tinay utilizes meditation, for example, are subtly significant; discovering more about her and her family’s ideology regarding wellness and healing could have made this a more memorable—and powerful—read.

That said, the fusion of science fiction and fantasy elements is appealing, and Tinay is a character that readers will identify with and root for. And while this series is certainly palatable for both adult and young adult readers, the overall tone and coming-of-age topics (first kiss, bullying, curfew, etc.) make this a saga that should particularly appeal to young adult readers who enjoy storylines featuring strong heroines.

Also available as a hardcover.