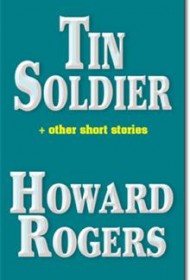 Howard Rogers’ collection of stories is a medley of promising ideas. While disparate, many involve the search for something — a loved one, the secret to life on earth, a cure for cancer.

The title story, “Tin Soldier,” follows Booker Kettinger, a character haunted by the death of his grandfather and obsessed with uncovering the secret behind the mysterious organisms he discovers during a drilling operation. “Unsung Hereos” describes the experiences of Clayton, a former Confederate soldier who may now be among the living dead. The final story and the longest in the collection, “It Never Rains in Pratt,” investigates what life may be like in 2035, when the scorching heat of climate change forces people in the Midwest to live underground. Other stories in the collection follow a woman searching for her mother, a blind dog that prevents a disaster, and a man who believes table salt may be a cure for disease.

Though the ideas behind the stories are intriguing and there is some effort to unite them through a central theme of seeking, there is little else binding these six tales together, and the collection reads like a disjointed assembly of awkward parts. A dearth of paragraph breaks and an abundance of punctuation issues (“At 10:30 a.m. Bronco mixed gin and squirt. For himself and Lacy and switched to the political news channel”) makes for a difficult reading experience.

In addition, Rogers is fastidious in providing surface-level details, but the deeper, more interesting elements necessary to create a nuanced, resonating short story are absent; the stories are long on extraneous details – like dates and recounting a character’s every move – but short on character and theme development. Ultimately, Rogers focuses on “telling” rather than “showing,” an approach that encumbers characters and plots that might have sparkled if left to reveal themselves on their own.