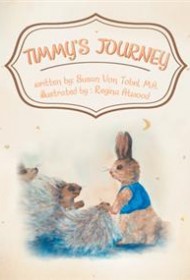 Susan Von Tobel’s picture book, Timmy’s Journey, takes a narrow aim, focusing on a situation that isn’t particularly prevalent in existing children’s literature. A licensed clinical psychologist working with children in Portland, Oregon, Von Tobel delivers a story that should be enjoyable for any child, but will have special resonance with those who have had multiple placements into foster or adoptive families.

Timmy, a young rabbit, loses his mother when she runs off into the woods to explore a mysterious sound. Timmy’s mother doesn’t appear again, and no specific fate is revealed for her, which leaves her later absence open to interpretation and potentially provides a much more universal experience for readers.

A bunny family cares for Timmy while seeking a permanent home for him—their own is too small. They soon find a family of porcupines, with a boy eager for a new brother. But, as Von Tobel writes, “They forgot to ask if he had quills like them.”

When Timmy’s soft belly and the porcupines’ sharp quills prove incompatible, Timmy is returned to the bunny family, until another porcupine adopts him. This mother has adopted non-porcupines before, and Timmy is welcomed into a family of hedgehogs, bunnies, and dogs, whose differences make no difference to their sense of family.

Atwood’s illustrations are warm and sympathetic, just the right tone for the story. Von Tobel writes in rhyming text, which often falls into the trap of awkward verses to accommodate the end rhymes and eschews periods at the end of sentences, which can be jarring. But her message outshines these flaws, resulting in a tender book that, for some children, will strike just the right chord.