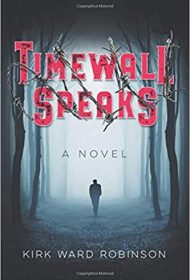 In Kirk Ward Robinson’s Timewall Speaks, a young man is released from prison only to find himself struggling to survive and remain free.

Timewall Speaks got his odd name in the delivery room when his mother Blaize asked her friend for the time on the wall clock. Receiving no answer, Blaize then demanded “Time! Wall!”—which is what the doctor wrote on the medical papers. This isn’t the only reason the odds are stacked against Timewall from day one: His mother has three other children, and their father is nowhere on the scene.

Now Timewall is a free man after two and a-half years in prison for stealing beers. He’s haunted by the murder of his baby sister, and with no real prospects for the future, it seems only a matter of time before he’s back in the system.

When his parole officer sends him to work at a carwash, Timewall finds himself employed by an arrogant former classmate who lords his authority over him. Surrounded by former inmates, Timewall must navigate a dangerous environment rife with corruption. But Timewall has a sharp mind and resourceful spirit that allows him to see opportunity others might overlook, providing him hope for a brighter future.

This is a well-executed, gritty story with a largely sympathetic protagonist readers will cheer for. It’s realistic in detailing the lives of people living on the society’s fringes, portraying the poverty and violence, but also the ingenuity and bonds that make survival possible. Robinson excels at description, noting for example that Blaize’s single wide looked “like nothing so much as an old white re¬frigerator lying on its side in a patch of weeds.”

While the plot generally moves at a good clip, the ongoing bleak and dangerous environment can feel somewhat oppressive at times. But that’s also what makes it realistic and creates sympathy for Timewall.

Ultimately, this is a compelling, insightful read—one that should appeal to a wide audience.