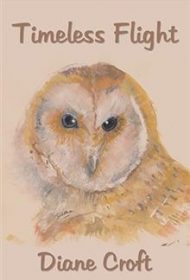 Diane Croft’s poetry collection is an admirable attempt to convey the physical and emotional challenges of living with Parkinson’s disease, as well as the humor and positive attitude that help make it bearable.

Many of the poems give a powerful sense of what it must be to struggle with this condition, using a humorous viewpoint to soften the blow. For instance, in “Laugh with Me,” the speaker is buying a drink in a French roadside station when she sees the two gendarmes guarding the store watching her. She chooses “more bottles than I need./ Crackling, fizzing bang against the wall/ My tremor now going off on one,/ Like never before/ The joys of PD such fun.” She pays her bill, smiles and shrugs, “then had a laugh” as the gendarmes look at the “mess I’d left behind.” Finally, she notes: “You have to laugh, yes out loud with me.”

Other poems take a more serious tone. For instance in a poem titled “She,” the speaker emphasizes all the negative qualities of a particular person, someone “who knows everything about nothing,” “who wants to live her life through you” and who “never owns up, denials [sic] her game.” The revelation of the person’s identity at the end is unsurprising but still sad, being someone who should be a source of love for the speaker.

The frequent spelling errors, sadly, take readers out of the poems. “Course” frequently becomes “cause,” and “you’re” is “your.” Also, Parkinson’s is referred to as “PD” or phonetically as “Pee Dee,” which might confuse readers unfamiliar with the abbreviation. Thankfully, a few illustrations show the full word (“Parkinson’s”).

An editor could help the author bridge the gap between idea and execution. Nonetheless, the effort Croft shows in writing these simply stated, uplifting and sometimes funny poems is commendable, and those who suffer from Parkinson’s will surely relate to the feelings and situations she relays here.