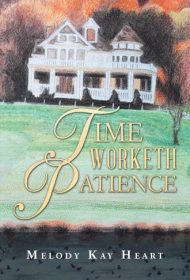 Time Worketh Patience is a love story between a woman and a much-older male teacher.

Michelle, 32, has had a crush on teacher Jesse Fox since she was in high school. Jesse’s age is unclear: We are told he has a granddaughter who is the “head nurse” at a hospital; she must be at least 25, so her grandfather is probably pushing 70. Oddly, Michelle’s mom comments to her daughter that Jesse “doesn’t look much older than you,” and Michelle thinks he’s “fifty-something.”

Later, we find out that Jesse first developed a crush on Michelle when she was sunbathing in her bikini before she was even in high school. He then made moves to ensure she was in his class when she reached high school.

At that time, he didn’t act further on this illegal relationship. Later, though, Michelle and Jesse each have intimate relationships with another person, as well as each other. An example of a typical sex scene: “She kissed his lips again before she started kissing his ear lobe, sucking it gently while lightly caressing his other ear with her fingertips. Jess was enjoying her touch, with his hands roaming around her tighter…” Jarringly, the author intersperses excerpts of Christian preaching and Bible verses, seemingly to attract a Christian audience.

Grammar, spelling, capitalization, and punctuation errors abound. Michelle laughs that Jesse is a “stocker.” Other misspellings include: “I’m sorry deer,” “esse” (for Jesse), and both “Champaign” and “campaign” for “champagne.” Additionally, logic problems are rampant, and the writing is tedious, focusing on mundane details, such as someone waking up at 7:17 a.m. or 9:12 a.m., as well as long lists of the food characters eat.

The author manages to create some romantic suspense, using a plotline of Jesse mysteriously leaving town, but the final reveal is unrealistic and unsatisfying.

In sum, this book requires careful revision. As is, the story is unlikely to be appreciated by either Christian readers or romance fans.