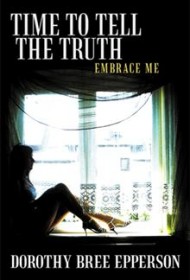 The flawed but arresting Time to Tell the Truth: Embrace Me illustrates how those terribly abused by others can learn to love themselves and emerge triumphant. Dorothy Bree Epperson is apparently the nom de plume of Ramona Valerie Hutchins. Yet the author begins the book with “Hi, just call me Yevette Sylvia Catherine Stevens.” While the back cover notes that “This book is a true story,” readers may be confused about whether this is fact or fiction.

The book opens with ten brief chapters of vernacular prose detailing the history of the protagonist’s abuse, followed by a generous serving of poems, all written in capital letters, underlining their emphatic nature.

In the first section, Yevette suddenly finds herself the focus of her children’s father’s abuse after moving into his Philadelphia apartment infested with water bugs and mice. Events of brutality are chronicled, including the man’s threats to kill her family and his shooting a bullet outline around her body as Yevette stands frightened against a wall. “Who said I can’t shoot?” he says.

The reader roots for her escape, but It’s not until the publisher of the local paper she’s been sending poems to — “another devil, I found out later” — offers her a haven that she establishes a safer life for herself and her children.

The poetry that follows details Yevette’s life and surroundings during this time, from evocations of parental crisis like “Before Tomorrow Comes” to lighthearted gripes like “Car Trouble.” Other topics include her gossipy neighbors; the saving grace of poetry; and her eventual discovery of strength and self-reliance.

Grammatical errors, missing words, misspellings, and the occasional questionable word choice to achieve a tighter rhyme mar the work, which is likely to challenge general readers. But such discrepancies do nothing to detract from what is unmistakably a heartfelt divulgence of painful inner truth. Despite the books’ flaws, the work can serve as inspiration for other victims of psychological control disguised as devotion.