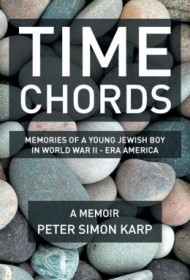 Thousands of miles separated rural upstate New York from the war that was swallowing Europe late in 1940, but the ravages of the turmoil play an immediate role in Time Chords.

At the outset of Peter Simon Karp’s historically based novel, Joseph, a 7-year-old Jewish farm boy, hears rumors and feels the impact of the faraway conflict. He tracks the progress of the German army in newspapers with his father and dreams of Nazi storm troopers marching up the dusty roads outside his door. From a playmate that escaped Berlin with his parents, he hears horrific tales of Jews persecuted in unthinkable ways.

Karp offers a unique spin on the coming-of-age story. His two main anecdotes seemingly have little to do with the war. First, Joseph undergoes a brutal attack by his schoolmates after his teacher makes his whole class stay late, blaming the punishment on Joseph’s habitual tardiness. Three years later, Joseph and several friends take an old rowboat out on a lake near his farmhouse. The trip starts as a pretend military mission, with Joseph imagining himself as a war hero leading soldiers into the fray, but it ends tragically.

On the surface, both stories feel like standard tales of adolescence, but in Karp’s measured, evocative writing style, the evils of the European strife are never far away. The teacher who makes Joseph and his classmates stay late also repeatedly picks on him, likely out of anti-Semitism. The bullies’ attack is brutal – they throw stones and hurl ethnic epithets. Hatred feels much closer than the ghettos of Berlin.

Such spins give the stories deeper meaning than the simple trials of a farm boy, though Karp’s misplaced focus on certain thoughts and descriptions can be distracting. The war in Europe had plenty of echoes in America, and Karp’s carefully plotted novel highlights the impact of that war, even on a boy far from the conflict.