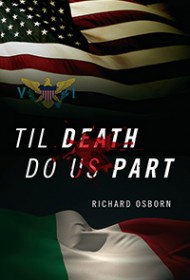 With a successful single doctor, an unhappily married woman, and one phone call that can solve both their problems, Til Death Do Us Part combines romance and mystery against a backdrop of international intrigue.

When Aaron Kelley meets Maria in a bar he frequents, he’s beyond smitten. An affair fuels his obsession, which then turns to thoughts of murder. A friend with connections to an anti-Mafia military hit squad can get Maria’s Italian husband out of the picture, but once the call is placed, the order can’t be withdrawn.

With such a plot, this could be a ripping yarn, but at a mere 100 pages, it’s surprisingly slow going. The story’s dialogue is rough and jarring; it’s hard to imagine anyone saying, for example, “I do have to say you have made a difference in my life toward a relationship with a person of the opposite sex.” Mixed and confused metaphors slow things even more, as in: “Dave knew he had opened Pandora’s box, exposed a fuse, and Aaron wanted to light it.”

While the story’s cover copy suggests it’s packed with twists and turns, it proves to have just one, on the last page — and it’s hinted at strongly enough that many readers will get there sooner.

Finally, the story has some copyediting issues. Author Richard Osborn alters the spelling of character names (Alphie/Alfie), as well as the book’s title, which has an apostrophe on “’Til” on the back cover but not the front.

Readers love a story of obsession and the dangerous paths it can lead to. Til Death Do Us Part could be a novel in that vein, but it needs comprehensive editing and significant plot and character development to achieve the goal. It may be more realistic to prune it back into a lean, mean short story.

Alas, currently it’s stuck somewhere in between. That, combined with the flaws mentioned, makes for an unsatisfying read overall.