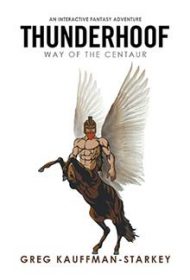 In his author bio, Greg Kauffman-Starkey points to a longtime fascination with the element of choice in narrative fiction, a feature that steers his debut novel, Thunderhoof: Way of the Centaur.

Modeled broadly on the “Choose Your Own Adventure” gamebook series of the ‘80s and ‘90s, Kauffman-Starkey’s novel offers readers options in laying out the tale of Thunderhoof, a usurped king who must fight his own brother to regain his rightful title. Thunderhoof meets up with the dwarf, Brand Stormhelm, who has escaped a disastrous attack on his home village. From there, readers are allowed to choose which direction the story will take, from progressing to epic battles and revelations to taking a wrong turn and quickly perishing. Readers find prompts at the end of key sequences;  to have the characters head in a specific direction, surrender or to fight, for example, they are directed to flip to a corresponding chapter.

The author’s style echoes the basic structure and approach of modern fantasy writers such as Terry Brooks and Terry Pratchett, and Kauffman-Starkey writes with an attention to detail when it comes to character and action. He paints strong characters in the centaur Thunderhoof and his traveling companion, Brand Stormhelm, and the action sequences are, for the most part, dynamic and engaging.

The options in this book, however, aren’t as varied as the plot points that marked the vintage gamebooks. The limited number of narrative branches available will likely leave hardcore fans of the vintage “Choose Your Own Adventure” series wanting more. Also, Kauffman-Starkey keeps the chapters brief. Coupled with the limited plot options, this means that there’s not much opportunity to get fully immersed in Kauffman-Starkey’s imagined world.

In sum, while the author makes a strong attempt at a novel form of storytelling, and his effort yields some genuinely compelling moments, overall the book may leave fantasy fans wishing for  more.