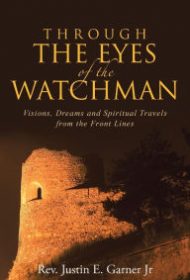 Rev. Justin E. Garner Jr. feels God called him to be a watchman, to warn of spiritual attacks not visible to others. He writes, “Looking back…from a very young age, I had the gift of spiritual sight. While other children were having nightmares, I was having visitations.”

Garner’s book recounts his (and other family members’) spiritual encounters with demons and angels. It also includes a detailed vision of heaven that he experienced at age 17. In his reflection on heaven, he writes of Jesus: “…I knew no harm would come to me as long as I stayed in His presence. As I looked into his eyes I knew what eternity was. If love has a color it would be the blue of our Savior’s eyes.”

When confronted with demonic spirits, Garner called on the name of Jesus to vanquish them. These spiritual beings took different forms, once inhabiting a teddy bear, other times materializing in animal- or human-like form. Warrior angels were often visible to him as he prayed for protection from the evil spirits.

Garner writes in a primarily “telling” (vs. “showing”) style, yet his descriptions—especially of the visions and visitations—effectively recreate the scenes, often with sensory details. His chapters are well paced, and although the book covers many years and includes the experiences of his parents’ and wife, the narrative is easy to follow. Garner offers several humorous anecdotes, including one of a ministry partner mistaking a pet chimpanzee for an evil spirit. Unfortunately, the text contains some distracting typos and missing words.

This book is about a dimension spoken of in the Bible, but often ignored by Western churches. It will appeal most to readers who are open to the possibility of, or are curious about the spiritual realm. As Garner states, “I am only a messenger, the watchman. It is my job to present the facts to you. It is up to you to believe them or not.”