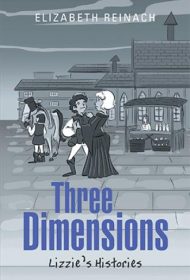 The pieces, most only a few pages long, offer nontraditional takes on the past. For instance, in the hilarious “Jeremy Kyle in History,” the British talk-show personality hosts time-traveling royals, including Henry VIII and Queen Victoria. He administers paternity and lie detector tests and passes judgment on their unwillingness to pay child support or find gainful employment.

Many of the tales confront the difficulties women have faced surrounding marriage, money and sexuality. In the especially poignant “An Inebriate Bride,” an alcoholic upper-class old maid entertains a proposal from a handsome fortune-hunter. “St. Bartholomew Square” follows two poor siblings’ attempts to make an honest living, as well as an honorable gentleman’s attempts to stop a procuress who preys on innocent girls. “Nancy” imagines a meeting between Charles Dickens and his doomed character from Oliver Twist.

Reinach brings the past to life with immediacy. Despite their brevity, many of the stories reveal complex and moving personal and social dynamics. Reinach comes across as a true history lover, deeply engaged with the not-so-pretty corners of the past.

Extreme brevity does compromise some of the stories, however. “Dancing at Bougival, 1883,” for instance, begins in media res and never quite catches readers up. Likewise, the intent behind “Selfridges Opens!,” an imagined newspaper report on the debut of the iconic department store, is unclear. “St. Bartholomew Fair,” though well-imagined, could be stronger without its multiple point-of-view shifts.

The book is also hampered by the cartoonish appearance of its illustrations, which undercuts the seriousness and adult nature of most of the tales.

Overall, Lizzie’s Histories has much to recommend it to fans of history and classic literature. Some revision would make it more appealing to a wide audience.