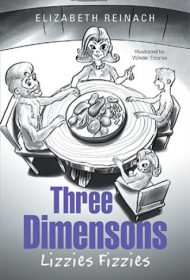 Three Dimensions: Lizzies Fizzies is the first in a series of short story collections written by Elizabeth Reinach as part of a contribution to the writing community in her hometown of Aberdeen, Scotland.

The compact volume includes 23 tales, each approximately two to four pages. Most focus on quirky characters and/or comic adult-oriented entertainment, from the opening story “Booby Prize,” where a London hotel for clergy re-purposes brassieres into decorative fruit containers, to “Kiss and Tell,” the imaginative take on Cinderella where a hefty German conference delegate finds her princely match from a group of men of varying shapes, sizes, and cultural attributes, to a performance piece written in play format where Lucifer and angels converse.

Many stories revolve around the misadventures of old Army buddies Archie and Ted. Archie was Ted’s commanding officer, though it seems both were dishonorably discharged for disobedience and desertion. Here, the humor is drawn from misconstrued assumptions, excess drinking, and hearing problems.

The final entry, “The Professor and The Cleaner,” is the longest and deals with a lonely sociology academic and his developing obsession over a colorful university worker with hair that “seemed as if a dead rat had been implanted on top.”

Windel Eborlas’ black-and-white drawings correspond to many of the stories. Although complementary to the narrative, the simple cartoon-style visuals often lack close representation of the story’s detail.

Overall, the stories range from the downright bizarre (“Green and Lark”; “Desirable”) to those that seem an extended joke with the finale the punchline (“Toff’s Bottle”) to tales with a moral (“U or Non U”). American readers will stumble over some of the vocabulary and cultural references. Stories are laced with the titles of Vicar, Lord, Constable, and Solicitor. Games of “conkers” are played, and children entertain themselves out on the “heath.”

Such references may deter some readers, as will the unevenness of the stories. But those drawn to tales with a UK bent will find some rewards here.