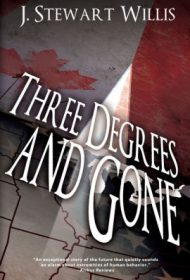 J. Stewart Willis’ Three Degrees and Gone is a post-apocalyptic thriller set in a near-future Earth irrevocably changed by global warming. It follows three families as they attempt to find sanctuary in Canada, now a haven for global warming refugees.

In the year 2086, the average global temperature has risen three degrees, submerging countless cities and towns, displacing millions, and destroying local and regional economies. Harry Sykes is an accountant living in Savannah, Georgia, a city on the verge of disappearing underwater. When a hurricane essentially destroys his home, he’s forced to evacuate—and must somehow survive and find enough money for his son to finish college.

Dana Wilkins is stuck in an abusive relationship with her morally bankrupt husband, Frank, who wants to leave the monotony of his marriage and job and escape to Calgary, where his lover awaits. With their teenage daughter in tow, they purchase illegal passage across the Canadian border—but Frank has something nefarious planned before they arrive.

Cynthia Sherwood, a white woman, is married to an affluent black man in Chicago who doesn’t hide his infidelities. She and the couple’s daughter Adeliza decide to escape their life of boredom for Canada to begin anew. All three families’ journeys eventually intersect—with very different outcomes.

The storyline is fast-paced and action-packed, offering a well-executed conclusion. Comparisons to current events, such as Trump’s attempt to close the border to immigrants, are unavoidable and profoundly moving.

On the down side, greater focus on specific global consequences of climate change would have increased the story’s intensity and scope. Additionally, most of the characters are stereotypes (the “doormat” wife, the abusive husband with no redeeming qualities, etc.), and Willis’ inexplicable attention to racial purity—students talk about being “pure black,” Adeliza calls herself a “mulatto,” etc.—is bizarre and utterly irrelevant to the story.

Readers who can overlook such issues, however, will find a fast-paced read with intriguing themes.