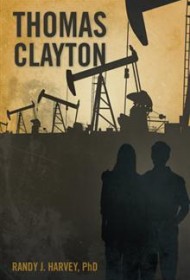 Randy Harvey’s Thomas Clayton is a well-plotted modern-day noir with plenty of hardboiled characters and crookedness to entertain readers.

Set in a small Oklahoma town, the story begins with teen Thomas Clayton (T.C.) losing his family in a tragic car accident. His father’s half brother, oil baron Boats Nichols, whom T.C. despises, is not cut out to raise the boy, so a kind couple looks after T.C.

But Boats has plans for T.C., putting him to work as an oil rigger and persuading the boy to try out for the local football team. T.C. grows into a powerful and fearless young man, falling in love with Mar. But her ex-boyfriend, a tough young man, makes life miserable for the pair.

Meanwhile, a local doctor has been murdered and a box of photos has gone missing. Boats and the other powerful members of the clandestine organization Combine scramble to figure what they can do about the incriminating evidence that will clearly send most of them to jail. The implacable sheriff investigates the crime, and as the conspiracies mount, one murder after the other takes place.

Soon, it becomes clear that Boats and his cohorts are being framed by those intent on snatching Boats’ oil fortune. As the story unwinds, Boats imparts a dark secret to T.C. that paints an entirely different picture of the real man whom the young boy once hated.

Author Randy Harvey writes in a terse, detailed and hyperkinetic style that suits the noir genre. In his efforts to spin a thrilling tale, however, he may have sacrificed some credibility by making some of the “good guys” just as coldblooded as the “bad guys.” Though some readers may find this unsettling, the author’s deft blending of the stylistic elements of noir —dark characters, sparring (if sometimes stilted) dialogue and downbeat small town politics—make for a fast-paced read.