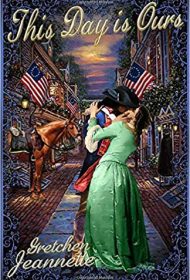 Set in Philadelphia during the American Revolution, This Day is Ours follows an elegant noblewoman who is engaged to an aristocrat.

Hiding against a terrace wall, an amused Jack Flash watches Charles Villard, a leading tradesman in Philadelphia and aristocrat, propose to Alexandra Pennington, a widow whose allegiance lies with the crown. Jack Flash can’t wait for the whole event to be over so that he can carry out his robbery mission. Despite his hurry, he notices and is struck by Alexandra’s beauty.

Days later, Alexandra wrestles with the decision to marry Villard. On the surface, he’s everything she could ever want: an accomplished man of noble stature. Still, she decides to take her time before committing to him. As rumors of war increase, Alexandra is sure where her loyalty lies—until she meets a rebel who makes her question everything she believes.

The story’s perilous time frame—close to and during the American Revolution—heightens the uncertainty surrounding the love story. Societal boundaries that separate a noblewoman and a rebel during this era are almost impossible to overcome, which makes their romance even more intriguing.

Keenly developed main and supporting characters add to the story’s authenticity. Alexandra’s sophistication contrasts with the rebel’s unpolished nature. Despite the difference, Alexandra easily takes to him for his friendliness. On the other hand, Villard is brutal, determined, and will stop at nothing to get what he wants.

Admirably, the plot captures both the Loyalist and Patriot perspectives, illustrating each side’s flaws: The Loyalists are ignorant of the struggles common citizens endure, while protests among the Patriots sometimes turn unruly and destructive.

All the aspects of the novel—characterization, dialogue, setting, and pace—are skillfully brought together to create an immersive love story that transports readers back to fascinating times.