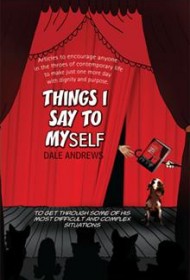 It’s not entirely clear from the bio on the back of Things I Say to Myself what exactly Dale Andrews does or did professionally. He not only describes himself as a “Christian Mystic,” but also as “an experienced TV talk show host and occasional stand up comedian.” Early on, we’re told he was a “campus minister “ and later that he does the chores around the “parsonage.”

While readers might justifiably want a better idea of who is behind these words, they will begin to get a picture of the author as he pontificates on life and offers advice throughout this 608-page tome.

Andrews’ book is a compilation of the one- or two-page “statement(s) of encouragement and insight into himself and others” that he writes each morning. Sample titles show the variety of thought here, including: “Positive Procrastination”; “Mental Transformation”; “Dude”, and “Silly Putty.”

Early on, it becomes clear that Andrews is a Christian with little tolerance for those whose beliefs differ from his. In a meditation entitled, “Noble Living,” he calls secularism “cruel” and argues that “it is a self-hate trip tied to a materialistic point of view.”

The writing is sometimes mind-bendingly obtuse. One chapter asks: “Would you go into a burning building to save yourself?” Another begins with the dubious assertion that “Straight A students are less likely to finish college.” In a breathtaking spin on “What would Jesus do?” Andrews wonders what would Jesus do today with his leisure time. One possibility: “he might just fit in and own an arsenal.”

The entries are arranged as haphazardly as the author has chosen his topics. There is no overarching organization, hampering readers’ ability to make sense of the book as a whole.

In light of this lack of organization and focus, readers willing to dip in and out of the book may find some nuggets here. Others will conclude that Andrews’ book is a mixed bag at best.