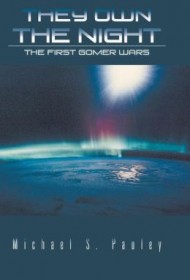 Michael S. Pauley’s They Own the Night offers scenes chillingly evocative of War Of The Worlds, the book that invented the alien-invasion story.

In this story, invading Gomers eliminate most of the world’s leaders in one night and are devouring humanity with energy-sucking light beams. That’s when retired General Mike “Mighty Mouse” Patrick learns it’s time for “an old soldier that would always be ready to run towards the sound of gunfire” to save the planet.

Unlike H. G. Wells’ everyman civilian philosopher, the prescient narrator in this first-person tale is a three-, soon-to-be-four-star general. Contrary to military science fiction classics such as Heinlein’s Starship Troopers or Haldeman’s The Forever War, where the officer class usually meets or exceeds the suspicions of enlisted personnel, this story is told from his able, courageous and steely-eyed perspective.

It’s difficult to find military science fiction that isn’t partisan and jingoistic, idealized, or rises above its genre, and They Own the Night is no exception. There’s an abundance of sanitized violence, salty soldier’s vernacular, “misguided and full of shit” politicians and lying, trigger-happy Russians. Civilians are all but ignored, and scientists are “eggheads” who manage to weaponize their findings just in time for the earth’s savior, “the finest Army in the World [sic],” with the help of the Navy and Air Force, to kick the Gomers’ crab-like alien butts off the planet.

Readers who like their military SF with a bracing moral and philosophical chaser, á la Wells or Haldeman, may be deterred by the idealized heroic posture and dearth of complex socio-political subtext in this story. But if you like a neat shot of military SF where tactical-level, straightforward action is foremost, vivid and compelling and our guys have “one purpose only: Winning against an enemy that had no business on our planet,” this book will be hard to put down.