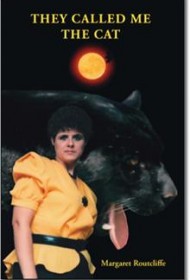 Born during a full moon on Friday the 13th, the protagonist in Margaret Routcliffe’s novel is destined to become a force in the world as she develops cat-like survival instincts that keep her moving forward, despite numerous near-death experiences.

A child from a small town in Maine, seven-year-old Stephanie McConnell is sent to live with an aunt and uncle unknown to her in Ontario while her twin siblings are treated for a mysterious disease contracted on the family’s visit to Africa. “The Cat,” as Stephanie soon becomes known as because of her intensive feline ways, finds herself in a mansion where her cousin Stuart and Uncle Pat adore her, but she is shunned by Stuart’s sister, Deborah-Anne, and Aunt Elizabeth.

As the story progresses, Stephanie grows into a beautiful woman who becomes an expert equestrian, a whiz at stock market picks, a prize-winning photographer, a stunning model and a highly successful lawyer. Numerous other characters enter her life, both friends and enemies, and The Cat finds herself grappling with unexpected affairs between family members and dodging bullets while trying to reclaim the mansion she learns is rightfully hers.

As the plot description might indicate, Routcliffe’s book suffers from too many unbelievable situations, such as the fact that so many main characters become instant successes in life. In addition, the characters are thinly drawn and impossibly good looking. Dramatic scenes move at the same pace as standard conversational sections, and the author delivers less-than-vivid visual descriptions. (“I looked from one to the other with a look of displeasure.” “Tom had a smile on his face . . .a joyous smile.”

The book has potential as a romance novel suited for the teen market, but only after much reworking and re-organization, with more realistically drawn characters and life situations, as well as more descriptive writing throughout.