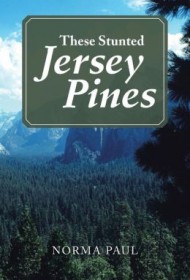 This articulate collection of 54 free-verse poems focuses on the author’s reactions to people and places in the southern part of New Jersey where she lives. She also explores her dream life, trying to make sense of her nightly visions through poetry.

Poems range from the mundane observations in “It’s One Of…” (“Haphazardly, you pick out a can of / tuna, a carton of chicken broth, / that bag of grits you don’t know why/ you have…”) to more poetic expressions in “The Brave Man When He’s Hurt” (“Will take a deep drag on his pain / Until it fills his chest and / Fills his lungs…”). Subjects addressed and depth of insight vary from poem to poem, yet the author’s style remains consistently self-assured.

Self-confidence, for example, fuels the poem “Something of My Mind and Thought,” in which she writes: “You can only do what you / must for yourself. Whoever is on the / outside looking in cannot matter.” While an intriguing thought, this detachment also limits reader accessibility.

The author does allow some vulnerability in her dream poems. In “A Memory,” “Dawning,” “Insistent” and “It’s Long Past Dusk,” the idea of searching for “a higher form of truth” emerges, tantalizing the author with its elusive quality and leaving her “frustrated.” These poems, along with “Music is the Space” and “Memory’s Currency,” offer readers more intimate connection than other more dispassionate pieces.

Though an impressive book overall, the collection could be improved with more attention to the audience. A table of contents, designated sections, and an underlying storyline would increase reader enjoyment, as would an editorial tweak to remove one instance of “hold on the skidding crust,” a phrase that loses its uniqueness by appearing in two different poems.

Also available as a hardcover.