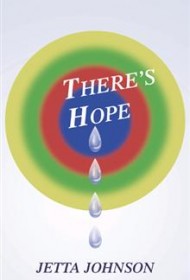 What if intellectually, physically, technologically and emotionally advanced aliens – Barians from the planet Baris – had scanned Earth for years, waiting until the right time to save its inhabitants from suffering, disease and premature death? That’s the premise of There’s Hope, a science fiction novel in which the Barians plan to restore perfect health to humans through a mineral called Ecto, which they surreptitiously provide in vitamins and fertilizer.

Three-quarters of this novel outlines how Barians, led by their handsome leader Brit, can save Earth using one family – a lonely, overweight widow named Janine Jordan and her three grown sons – as a microcosm of their global efforts. After Janine takes Ecto vitamins, her body rejuvenates and her mind expands. Post-menopausal before taking the mineral, Janine becomes fertile again. She and Brit quickly marry and solidify plans to spread Ecto throughout the world to improve mankind’s health and longevity.

After reading almost 300 pages describing the characters’ good intentions, hard work, true love and great sex, readers may be desperate for conflict by the time the Saticrans finally arrive (page 291) to corrupt young Earthlings with deadly drug addictions. Although author Jetta Johnson painstakingly describes the Barians, she offers only sketchy information on the Saticrans, an alien race living on a small group of sunless planets. “They prey on unsuspecting victims by promising eternal life, which they can’t deliver, and they breed unholy and unhealthy practices and enjoy unthinkable perversions.” We learn little more about them.

After a few chapters of mischief, the Saticrans disappear from the story almost as abruptly as they arrived, giving conflict and conflict resolution short shrift. Multiple spelling, punctuation, formatting and other typographical errors on every page slow the reading pace considerably. Though ultimately disappointing, There’s Hope may appeal to science fiction readers interested in the idea of life on other planets.