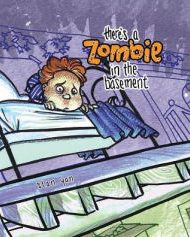 In There’s a Zombie in the Basement, author and illustrator Stan Yan addresses the fear of children everywhere: that monsters lurk in the dark.

The cover of this children’s picture book shows a big-eyed boy cowering in his bed. As the story unfolds, Yan tells the story of Milo, a little boy who can’t get to sleep. At first, Milo says it’s “ ‘cause there’s a zombie in the basement!” In subsequent pages, he also imagines a bird with “a big giant beak,” a circus freak with “eight creepy legs,” a “blood-thirsty ghost” and other scary creatures.

Yan illustrates every fearful being that Milo can dream up as Milo’s parents repeatedly respond to his calls. Mom and Dad are initially depicted as being nearly as scary as the creatures Milo fears. Angry-looking and disheveled, they loom in the doorway of Milo’s room. Far from offering reassurance, Dad warns Milo that he could be fired from his job if his son keeps disturbing him; meanwhile, Mom stands by, hands on hips, a picture of impatience.

The story is written in rhyme that is often fun and engaging. Milo’s parents tell him: “Well rest assured,/ you’re not thinking clear,/ A Zombie is really/ nothing to fear.” But occasionally the rhythm is marred by an unsteady meter: “If you don’t sleep,/ we’ll all be tired./ I’ll be late to work,/ maybe get fired.” Also, some word choices are likely to stymie young readers (“car creeper,” “zed”), as will Milo’s fear of a “pink colored pony riding a mime” — a joke that might bring a smile to adults but may have children wondering: What is a mime?

In the final pages, Milo’s parents seem less scary; they offer smiles and words of wisdom that could be helpful in a discussion of night fears. Some refining would increase the book’s appeal, but overall, children will relate to the age-old theme and enjoy reading the story aloud.