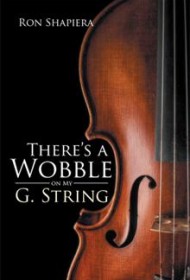 This unusual novel tells the disturbing life story of a mentally ill woman and the chaos she causes to the people around her.

Kerry Wallace is a talented violinist, growing up with stable, normal parents, with a seemingly idyllic life. Inwardly, however, she struggles with violent voices in her head and a hatred of her femininity. She becomes close friends with another girl, and her voices grow quieter for a while. Before too long, though, Kerry’s compulsions convince her to do something terrible to her friend. Later, she dresses as a man, adopts masculine traits, and passes as a male at university.

There, she meets Vickie and they quickly become lovers. Vickie introduces Kerry to the special violin that becomes an object of obsession to the troubled woman and leads to a disturbing plan to make it her own.

The novel is told in a clever fashion, as an extended flashback, framed by Kerry’s selling of her precious violin. The intensity of her “demons,” as she calls her voices, and the lengths she goes to quiet them, makes for compelling reading.

Readers may be troubled, however, by the author adding gender identity issues to mental illness for Kerry to deal with, which seems to equate the two. That the back cover refers to her as a “psychopathic lesbian” certainly does not help, and is sensational to boot. In addition, while readers will keep the pages turning to find out how Kerry’s past led to her terrible present state, some may find her actions unbelievable, especially Kerry’s rather intricate schemes.

Still, anyone who has dealt with mental illness, either themselves or a through a loved one, will recognize Kerry’s struggle, and the immense difficulties faced in getting treatment. Those who appreciate unconventional characters will find some reading satisfaction here.