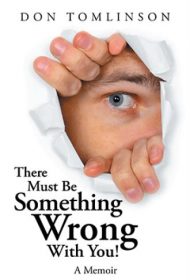 Don Tomlinson’s There Must Be Something Wrong With You! recounts his long struggle to come to terms with his sexual orientation.

Tomlinson’s first inkling he was gay came at age 6, when he observed naked men in a swimming pool locker room. The feelings that surfaced that day enveloped him his entire life. But raised in the black-and-white Leave It to Beaver 1950s and ’60s, Tomlinson lived a life of confusion, shame and denial, repressed by religion, family and society. “My stomach was always in knots,” he says of his youth. “I was always worried. I was always in fear. I felt I was a disappointment to my parents. I felt like I was a failure as a son. I felt like I was a disappointment to God.”

He got married at 22, held a variety of good jobs, fathered two sons, and served on various community organizations. However, his marriage was largely empty because of his secret. His wife battled cancer and alcoholism and eventually took her own life after 31 years of marriage, and he fought depression and later PTSD caused by his wife’s issues and other misfortune.

Finally, at 55, he came out of the closet, causing a family rift that still exists. But he has found peace and happiness. The purpose of this memoir, he says, is to help people gain insight into what it means to be gay.

His memoir is nicely written. Tomlinson doesn’t sensationalize his story or make himself a martyr. He comes across as a truly decent person who was boxed in by society, forced to be someone he wasn’t. His narrative is clear and precise. Well-developed descriptions of settings (e.g., his grandparents’ hometown) and events (his discovery of his wife’s body, etc.) make for an interesting read.

One hopes Tomlinson’s family will gain a better understanding of him and what he endured through reading this book. But family or not, his story is worth hearing.