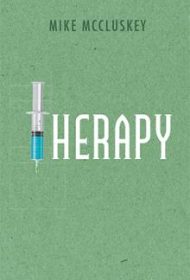 Mike McCluskey’s Therapy is a collection of rhymed and unrhymed poems arranged into two sections. Interspersed throughout are black-and-white photographs of the same doctor in a clinical setting, complete with skeleton and other medical accoutrement, in postures of progressive distress.

The poems in the first section, “PATIENT,” are written from the perspective of a mental patient frustrated with therapy and medication who believes the most effective treatment is writing. In one poem, he writes: “You should thank God that this writing is therapeutic,/ The mirror tells me to kill, but this is more prudent.” In another: “Sometimes I feel like I just can’t deal/ with the pressures of life/ […] So I walk around with a bloody pen,/ Stab it into my heart again and again.” These poems are largely redundant, expressing the same thoughts and feelings in expository rather than sensory language. Devoid of vivid scenes or images, they fail to offer an effective window into the speaker’s anger and frustration.

In the second section, “ESCAPE,” the speaker offers four chapters of verse—“Grim Life,” “Grim Death,” “Grim Limbo,” and “Grim Revenge”— that narrate the sad, vengeful life of a character named Grim who works for the circus cleaning animal stalls until he meets a troubled fate, his soul ultimately “trapped in limbo.” The poems have a gothic/horror feel to them, soon replaced by the initial speaker’s voice, which returns in the remaining poems. These resume the repetitive, expository patterns of the first part. For instance, in “The Reason That I Wrote,” the speaker states, “For my own sanity,/ For your very safety,/ This is my therapy.”

This collection seems written for the author’s own cathartic purposes, rather than crafted for an audience. Extensive revision would be required to entice the readership of other contemporary poets reckoning with mental health, illness, and strong emotions, such as Larry Levis (The Darkening Trapeze) and Terrance Hayes (American Sonnets for My Past and Future Assassin).